Algeciras is primarily and unashamedly a port and industrial centre, sprawling round the far side of the bay to Gibraltar.

It is an industrial city that supports the large deep water container port and nearby oil refinery. In the port area there are many Moroccans in transit, particularly during July and August when migrant workers return home for their holidays from their work in France, Holland and Belgium. As a consequence, there is a strong Arab influence here with many of the signs in Arabic as well as Spanish while, in the backstreets, you can find several traditional tea shops which specialise in the traditional Moroccan mint tea.

The port is the major departure point not only for cargo but also for ferries to N Africa, the Canary Islands and Barcelona. It developed quickly after the railway from Bobadilla was completed in 1890, becoming an important transportation hub for the region. It makes no concessions to foreign visitors and allows a rare glimpse of how the rest of coastal Spain used to be before the onset of charter flights and mass tourism.

Algeciras may not be a beautiful city but it does have a gritty individuality about it and, unlike some of the Costa resorts, is a very genuine place with a real port atmosphere. There are lots of reasonably priced restaurants to try – several with terrific views of the nearby Rock of Gibraltar.

Those that find the time to wander will fine quiet parks and tree lined plazas almost hidden away from the rushing travellers. For most people, however, Algeciras is just a stopping off place, en route to Tangier and Morocco. There are about eight crossings a day (2 hrs 30 mns or 70 minutes with a fast ferry). 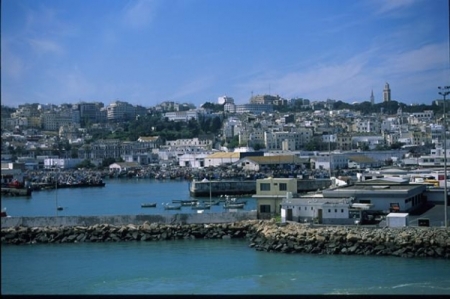 Situated on the W coast of Algeciras Bay, opposite Gibraltar, Algeciras occupies sloping ground backed by the Sierra de Luna Mountains to the W. Algeciras is on the S tip of Spain, at the extreme W end of the Costa del Sol. 9 mls N of Morocco across the Strait of Gibraltar. 90 mls SW of Malaga airport. 9 mls W of Gibraltar and its airport.

Algeciras is most popular among mature types wanting escape from the typical holiday-resort atmosphere and preferring authentic Spanish town life.

Also a much cheaper base from which to visit Gibraltar if staying on the “Rock” is too claustrophobic. Attractions here include strolling around the older parts of town, such as Plaza Alta and the “Barrio San Isidro”. A couple of historic 17th-century churches are also popular among tourists. Maria Cristina Park is also worth a visit.

By night there is a small selection of local bars, discos, bingo and cinemas (both in Spanish). The principal hotel provides a full entertainments programme day and night. In terms of beaches there are two sandy beaches liying at the W edge of the port, but Getares Beach, 2½ mls along the coast, is a more attractive proposition with a good stretch of fine sand.

Bars and the usual beach facilities are available here in summer only.