Cairns is located in the NE of Australia, about two-thirds of the way up the Queensland coast (1,100 mls NW of Brisbane; 460 mls NW of Mackay; 670 mls NW of Rockhampton; 750 mls NW of Gladstone).
Central Cairns is just 3 mls S of its own international airport. Tropical North Queensland in Australia is a holiday maker’s paradise, bursting at the seams as an atractive ‘hub’ destination for nearby attractions and tours that showcase this remarkable part of the world.

Built in the 1870s as a port serving the goldfields far inland, central Cairns has a small-town feel to it (population only 100,000) and is now almost entirely dedicated to tourism. The terrain is flat, with the streets following the common Australian grid pattern, and the town centre is little more than ½ ml wide by ¾ ml long. Only a few buildings such as the attractive old wooden houses built on stilts and the former customs house serve as reminders of pre-tourism Cairns, but there is little high-rise development apart from the odd tower block, built in 60s or 70s style (or lack of it).
Mainly used as the gateway or as a base to visit the islands of the Great Barrier Reef, tropical rainforest or “accessible outback”, Cairns is particularly suited and favoured by divers, ecotourists and bird-watchers. 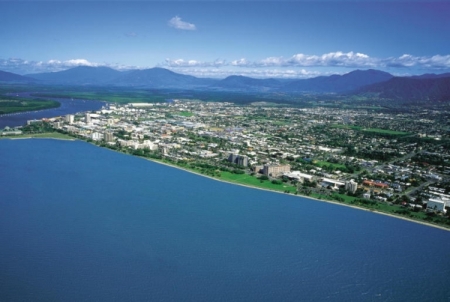 There is a full range of accommodation in Cairns from 4- and 5-star luxury to a string of budget backpacker hostels along the waterfront.

There are no beaches in Cairns itself although the town looks out over huge tidal mud flats whose only saving grace is that they attract flocks of birds to feed during their annual migration. Proper golden sandy beaches are found all along the 16-ml stretch of coast N of the city, past the airport and across Barron River.
Beach buses go to the miniresorts of Machans, Holloway, the evocatively named Yorkeys Knob, Trinity, Kewarra, Clifton, Palm Cove and Ellis. All are plagued with deadly box jellyfish Oct to May, although in some places nets have been erected to keep the stingers out.
Shoppers have a wide range of local outlets in the town centre. Several covered shopping malls including Orchid Plaza, Pier Marketplace and Cairns Central in the old railway station. Covered night market on sea front selling crafts, jewellery etc.
Popular attractions include the botanical gardens with lakes and tropical woodland; large aquarium; museum; art gallery.
By night there are plenty of places to eat or drink to live music, including a jazz club; some discos and two cinemas.

There is also no shortage of “tucker” options from fine international cuisine in hotels’ a la carte restaurants to fast food in seafront cafes. Seafood is a speciality but Thai, Mexican, Japanese, Korean and other ethnic cuisines are also on offer.